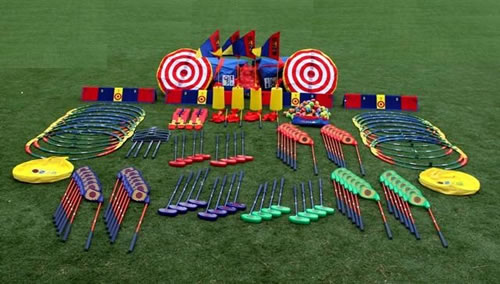 SNAG Golf is the best first touch program to effectively teach the game of golf to people of all ages and ability levels. SNAG® Golf offers the versatility to learn and play in almost any environment you choose. Over the past 10 years, SNAG® Golf has built a premier learning system recognized by industry leaders around the world as the superior method to teach golf fundamentals in a fun and easy way. SNAG® Golf provides cutting edge learning techniques never before seen in the world of golf.

SNAG contains all the basic elements of golf, but in a modified form. Falling somewhere between miniature golf and regulation golf, SNAG golf allows for full shots, pitching, chipping and putting. Its design makes it both safe and portable, allowing instruction, practice and play to take place both inside and outside.

Utilizing its own simplified rules and terminology, called “SNAGology,” SNAG® adds fun to the learning and playing experience. The SNAG® ball, slightly smaller than a tennis ball and covered with a loop material, has a limited distance with the average player hitting it a maximum of 50 yards. The target, called the Flagsticky™, is an above-ground weighted cylinder covered with a hook material. Unlike golf where you finish out by putting the ball into the hole, in SNAG®, you SNAGout by sticking your ball to the Flagsticky™.

SNAG golf has only two clubs: the “Launcher™” is used to launch (full shot), pitch and chip the ball. Like a putter, the “Roller™” is used to roll the ball on the “Short Stuff.” All shots other than rolling (putting) are played off a small rubber mat and tee called the “Launch Pad™.” This ensures that the player will love an optimal lie every time. Each Launch Pad™.

Perhaps the greatest feature of SNAG golf is that it makes learning as much fun as playing. The Snapper™ and the SNAGazoo™ are interactive, noise-making training tools that are a blast to use and fun to practice with, whether you are alone or in a group. The Rollerama™ and Bullseye Target™ are both designed to help develop accurate shot-making skills. For additional classroom fun, SNAG® offers the Sticky Jacket and Sticky Helmet, covered with the same hook material as the Flagsticky™. SNAGsters have fun wearing the completely safe, protective gear and trying to catch SNAG balls on the fly.